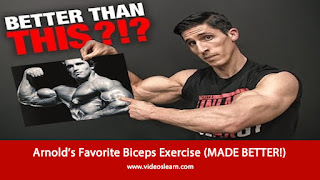 Arnold Schwarzenegger is no doubt legendary and known for his incredible biceps. In this video, I cover Arnold’s favorite biceps exercise and attempt to make it better by adding some additional science to do so.


The bicep exercise is the 21 curls.

Seven reps in the bottom half of the dumbbell curl, seven in the top half and the final seven done through the full range of motion.

The issue with the way this exercise for biceps is performed is that we usually select one pair of dumbbells or weights to complete it.

Doing this, we are limiting our strength throughout the whole exercise to what we can not only curl in just the full range of motion final seven reps but those same reps performed in a fatigued state. We can do better than this.

The key is taking advantage of the strength curve on the biceps curl. If you break the curl up into three parts (as we do in the 21’s) you realize that the two easiest portions of the lift are the first half and the second half, with the hardest part being in the middle one third.

Breaking it down even further, of the two easier portions of the lift the first half is slightly easier than the last.

If you wanted to get the most out of the exercise you would want to match your strength to the curve. You actually can do this.

Instead of grabbing the weights that you normally use to perform bicep curl 21’s, reach for a pair of dumbbells that is two steps up the rack.


For instance, if you can curl 35’s for 21 reps, opt instead for 45 pounders and perform the first 7 bottom range reps. From here, don’t rest at all and drop down to the next lightest pair of dumbbells. In this case it would be the 40 pounders.

Here you want to do the 7 reps in the top of the range of motion.

Again, accommodating for the drop in strength and fatigue that is accumulating this would be a good match of the strength that you still have in your biceps. After this, you finally grab the weights you were going to use for the entire 21 curl and perform only the last 7 full range of motion reps.

Here you should feel fully challenged like never before because you matched your biceps strength curve in all points in the range to weights that were challenging in all parts.

If you want to build biceps as big as Arnold’s you definitely have to take your training seriously. If you want to give yourself every advantage to see your fastest results then you want to start training like an athlete.